Sometimes, all words fail except: The Only Easy Day was Yesterday 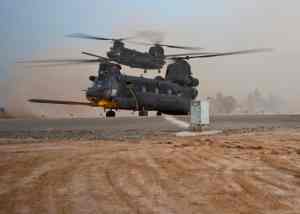 Yesterday, thirty plus United States military personnel were still alive. Today they are not;

Coalition forces suffered the largest loss of life in a single incident since US forces invaded Afghanistan in 2001 when a transport helicopter crashed during a raid in eastern Afghanistan, killing 31 US and seven Afghan special operations forces. The Taliban and an Afghan official claimed the Chinook was shot down, but ISAF would not confirm the reports.

The helicopter crashed today while conducting a raid in the Tangi Valley in the Saydabad district, a known haven for the Taliban in Wardak province. Thirty US troops, including 25 Navy SEALs, an interpreter, and seven Afghan special operations soldiers were killed, according to ABC News. The Associated Press reported that more than 20 members from Naval Special Warfare Development Group, more commonly referred to as SEAL Team 6, the unit that carried out the raid that killed al Qaeda leader Osama bin Laden in Abbottabad, Pakistan, on May 2, were killed. There is no indication that the SEALs killed today were involved in the bin Laden raid.

The Quick Reaction Force (QRF) was responding to other personnel reportedly under fire and in need of assistance. I hate passing on anything other than that, as it’s all leaked information from sources who “…spoke on condition of anonymity…” which means they have no business saying anything at all. I hate leakers.

If it’s indeed true that the majority of servicemen killed were members of DEVGRU, then the Taliban indeed got lucky today; but that’s all it is, dumb luck whatever else they may claim. One day soon that luck will fail them, and hopefully the last thing they see on this earth will be a Trident.

Living in Camarillo, CA, about 45 miles North of LA. I have a son, and two daughters. Working two jobs (welcome to California life), plus a (now retired) reservist in the US Navy Seabees so life is busy!
View all posts by Erick Brockway →
This entry was posted in Politics and tagged Afghanistan, GWOT, ISAF, Navy Seals. Bookmark the permalink.

1 Response to Sometimes, all words fail except: The Only Easy Day was Yesterday